When wanting to use an Irish-looking font on their computers, most people use fonts related to the Uncial script. But, where did it come from?

Contrary to what most Irish believe, the Uncial script is not their invention.  Uncial was derived from "Old Roman Cursive" between the 1st and 2nd century with the oldest known Uncial manuscript found in Egypt.  It remained as a high-level book hand until the 12th Century but was not a major influence past Britain.  Emerging alongside Uncial in the Roman Empire was Half Uncial, which was a derivative of "New Roman Cursive"

Insular scripts were "of the Islands" and followed the flow of Christian missionaries and scribes, particularly to and from Ireland.  A distinctive Insular Half Uncial, sometimes called Insular Majuscule, was first used in Christian Ireland where it adopted a Celtic influence especially in its use of decoration and illumination.

On the continent, the Half Uncial script, with an extra 300 (or so) years of Roman influence developed into several "National Hands” like Lombardic and Merovingian.  These variations were consolidated by Charlemagne and Alcuin of York into Carolingian, which is the ancestor of our present day minuscule (lower case letters). Carolingian, made it to England by the 9th century where it became known as English Caroline.  This script never had a major influence in Ireland, which continued to develop and use the Insular Half Uncial, until quite recently.

An early typographic font, from the 16th Century, used the distinctive rounded letter form, flattened pen angles and some distinctive letters like the "a", "d", "g" and "t" of the historical script.  This font when used in Ireland today is commonly called Gaelic Uncial or Irish Uncial while our normal selection of fonts like Times New Roman are used for everyday printing.

The Irish can certainly take pride in the script which has become associated with them and the Book Of Kells, the highest example of the Insular Half Uncial and its illumination. A history and pictures of the Book of Kells can be found at http://en.wikipedia.org/wiki/Book_of_Kells

A word of caution, Paleography, the study of ancient writing, is not a precise science and accurate dating of scripts or manuscripts is difficult.  My sources for this summary were Claude Mediavilla, Calligraphy, Scriptus Publications; Stan Knight, Historical Scripts from Classical Times to the Renaissance, Oak Knoll Press: Michelle Brown and Patricia Lovett, The Historical Source Book for Scribe, the British Library; Michelle Brown, A Guide to Western Historical Scripts from Antiquity to 1600, University of Toronto Press and Rutherford Aris, Explication Formarum Letterarum - The Unfolding of Letterforms, The Calligraphy Connection; all of which would be good sources for further study."


(Rick is a Professional Calligrapher who provides calligraphy services to Veterans Affairs Canada. You can see his work on the “Book of Remembrance,” in the Peace Tower).
Posted by Ottawa Comhaltas at 00:30 No comments: 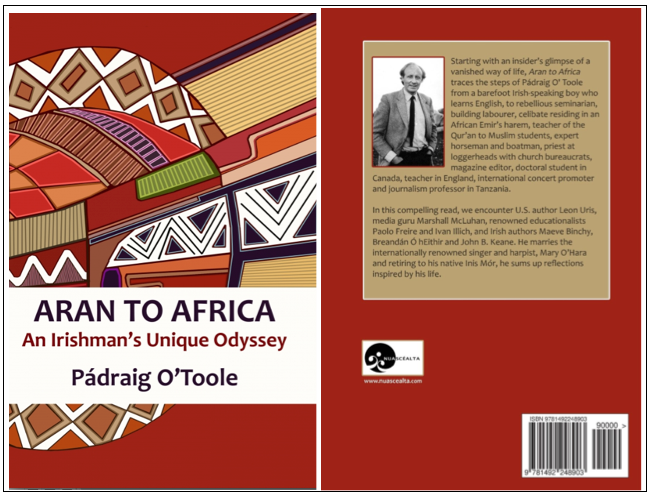 "Aran to Africa, An Irishman's Unique Odyssey," by Pádraig O’Toole

Pádraig O’Toole, was born in 1938 on the Aran Island of Inis Mór. The eldest of seven children, he had a carefree childhood, walking in bare feet to school until winter time when he wore knitted socks and pampooties.  He fished for supper, learned to manoeuver the currach, and helped his father make soil for their potato crops by mixing clay, sand and seaweed.  Embedded in his memory of childhood are evenings of song and storytelling by a fire of dried dung, with his family sitting ‘round on wooden kitchen stools.  In time, his mother bought a bicycle, and then a radio that operated on a large wet battery, which needed re-charging every few weeks.  Pádraig’s task was to mount the battery onto the bicycle and drive for miles into the village of Kilronan, where the local policeman charged batteries for all the islanders with his small generator.

The Irish government of the day allocated a number of scholarships to give primary school children access to teacher training colleges on the mainland. Gaining access to such a scholarship was the only chance a child had for ongoing education, thus avoiding the emigrant ship.  Pádraig, who neither spoke nor understood English, began a new adventure in Galway, where an unkindly landlady referred to him as the “stupid little boy from Aran”.

With his natural penchant for scholarship, he learned English and obtained consistently high marks in secondary school. In his last term a “frail, sunburnt missionary” in a long white cassock spoke to his class, telling of excitement and adventure working in Africa.  Pádraig applied to join the Society of African Missions, and following his university studies, he became a seminarian and an ordained priest, and set out in 1965 on a mission to West Africa.

Free thinking Fr. O’Toole never fell into step with the institutional Church’s requirement for blind obedience.  Far from being a “cultural imperialist” and given that historically his own Irish language and culture had been supplanted, he did not subscribe to the evangelical number-crunching view of “harvesting souls for God”. His commitment to the priesthood was about improving the world.  In Nigeria, his teaching and community development led him down many paths, from running mercy missions to hospital for a snake-bitten villager and a birthing mother, to tending prisoners on Death Row, to designing and building a combined currach -kayak to navigate the Niger River .

At the start of the Biafra war, Muslim officials urged the Emirs to establish secondary schools to address the lack of literacy of its populace.  The author accepted the challenge of moving to Lafiagi, a mosquito-infested village with no water or electricity, to help set up a school.   The best accommodation available was the Emir’s ‘palace’ where the author, a celibate Catholic priest, lived amongst the Emir’s harem of ten wives.  Fada, as he was known, was considered a “good pagan” and he and the Emir enjoyed conversation over the occasional bottle of Guinness “for medicinal purposes”.

There follow colourful anecdotes of  building wells, and of a cow and goat falling into them, and stories of scorpions and snakes, including one dreaded kind of spitting cobra known locally as “Good Bye Tomorrow”.  On leaving the Emir’s palace for home leave, the author reflects that he saved no souls, nor planted any crosses in the land.  But on top of a tall mango tree there hangs a crucifix, placed there by a playful pet monkey.

A return to Aran gave the author time to look out onto the ocean waves and realize that certain ‘priestly virtues’ escaped him.  He was “still living in the jet stream of the missionary rocket, not yet realizing that very soon, by the very laws of physics, if not spirituality, (he’d) have to curve out of that orbit…” After a fortnight of walking the crags he packed his bags mentally and prepared for a new chapter.

There were many new chapters:  he became a magazine editor, a television producer, a doctoral student in Toronto, a teacher of IT and Design Technology in England.  He married Mary O’Hara, the internationally renowned singer and harpist, and became her concert promoter around the world.  After Mary retired from performing, they spent six adventurous years working in Tanzania.

This is an account of a life well lived, narrated as though around a fire, or over a neighbourly garden fence.  Sincere, intimate, jocular and unaffected, this is indeed a Unique Odyssey, beginning and ending on Inis Mór, a place of westerly gales, where breakers spit at the shore “in an age-old love-hate feud of land and sea”.


If you wish to listen an Irish language review of this book, listen to RTÉ radio's
Iris Aniar Máirtín Jaimsie Ó Flaithbheartaigh, colúnaí.

We just received notice that this has been playing every Friday since January 3rd, 2014. You will be able to see the third instalment tomorrow Friday 17th January and you can also see the previous two parts for the next two weeks at the RTÉ1 site: http://www.rte.ie/player/ca/show/10241280 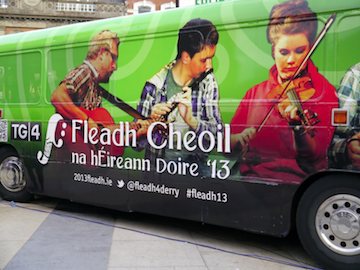 A series of six television programmes from the Derry Fleadh Cheoil presented by John Creedon and Aoibhinn Ní Shúilleabháin, will be shown on RTÉ 11 starting on Friday Jan 3rd at 7.30pm. The annual Fleadh Cheoil na hÉireann was held in Northern Ireland for the first time in Derry’s year as City of Culture. The series will feature performances from musicians from Ireland, Britain, America, Norway and Russia.

Among the groups featured are Flook, Reel It In, Síoda, Socks in the Frying Pan, The Moylurg Ceili Band, as well as The Friel Sisters, The Maguire Family, and The Mooney Family from Donegal.


The programmes will also include a visit to Scoil Éigse, the Scoil Éigse Tutors Concert and competitions including the Senior Céilí Band Competition.
https://www.flickr.com/photos/90847115@N02/sets/72157638383602243/

Posted by Ottawa Comhaltas at 11:18 No comments: 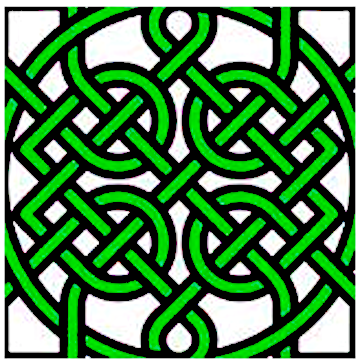 Cost: $65.00 (price may drop according to the number of people registered). Fees include all meals, snacks, and entertainment during the days of the Series.


The University of Ottawa Celtic Club presents an opportunity for all students of subjects related to Celtic Studies to meet and discuss issues that interest them.


The Series will take place 18-19 January, 2014 and feature student presenters as well as professional guest speakers. We would be glad to hear what you have to say! Just send in a presentation proposal along with your registration form!


Registration rates are presently $65 per person, and may drop as we get more participants. Fees include all meals, snacks, and entertainment during the days of the Series. Entertainment includes the CCÉ Ottawa ceili (Saturday 18 January).

Posted by Ottawa Comhaltas at 14:18 No comments: