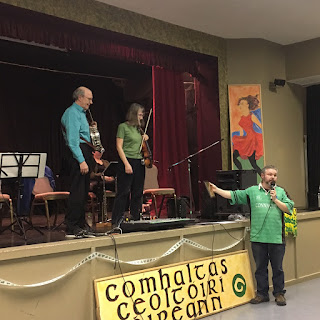 On Saturday 17 March 2017 at our St. Patrick's Day event, we recognized and celebrated the leads of our céilí band, Alf Warnock and Elizabeth Scarlett. 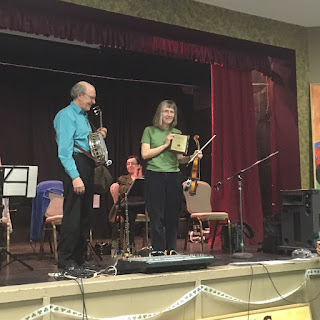 Alf Warnock and Elizabeth Scarlett have been involved in local traditional music since at least the 1980s when there was a traditional session at Rasputin’s.  By about 1997 Alf and Elizabeth ran the Rasputin’s session until Rasputin’s was destroyed by fire in 2008. By Elizabeth’s estimate, they played one or two sessions a week from 1984 to 2008. 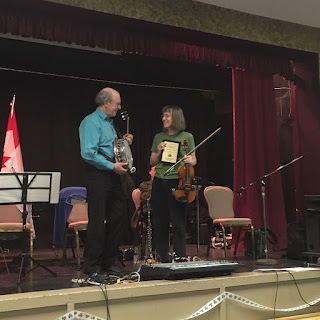 Elizabeth taught fiddle at the Ottawa Folklore Centre in the 1990s, and had started some Celtic groups that formed the roots of what later became some of the local slow jams.

Alf and Elizabeth have also been involved in the Ottawa Fiddle Club, and probably any other fiddle group that’s come and gone. 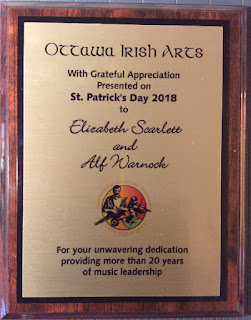 Alf, juggling his schedule, continues to play traditional Irish music with us, while also performing in local jazz ensembles.

For as long as I’ve been involved with this branch of Comhaltas, Alf and Elizabeth have ably and consistently served as leaders of the Comhaltas (now Ottawa Irish Arts) ceili band, more than 10 years, and they rarely, and I mean rarely, miss a gig.