Over the summer we were slightly more busy than usual. On June 16, myself, the Irish Officer (D. Doyle), the PRO (Oscar), the Social Media Officer (Pat), and guests Mary Muckle (harp), Pat Marshall (harp), Tim Robinson (pipes) spent the day (and lead up days, preparing) at the Ottawa Irish Arts booth at the "Ireland Welcomes the World" day at the Landsdowne park Horticulture building, which was also Bloomsday! The booth was prepared with instruments, Troir samples, Danny’s book on the Irish language in Canada, cds and sheet music for sale, the trifold, and up to date pamphlets.

There was a lot of interest in the harps, the language, and interest in our events. The estimate was about 4000-5000 people came through over about 12 hours. It was clearly the best public outreach the Irish community has had in many years, that was not on St. Patrick’s, which tends to get more attention for partying. It was very successful and I hope that the outreach is noticed at our events. 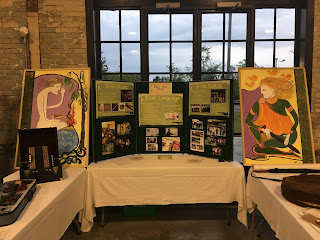 On August 2nd there was a spectacular concert at St Brigid’s Centre, Kildare Room, with Pierre Schryer, Dermot Byrne, and Adam Dobres. Special guests included several locals and the Shryer brothers, who had not played on stage together for many years. It was well attended by about 100 people. It was a fundraiser for Pierre’s brother Dan, whose house was destroyed by fire earlier in the summer. The Old Sod Society provided most of the advertising, and got many people to come. It was billed as a joint Old Sod and Ottawa Irish Arts effort, and we got recognition for that.

OIA was also invited to the exhibit opening in the Byward market hosted by the NCC and the Irish Embassy, "The Irish Diaspora in Canada: A History." It was also Liz Keogh’s last event as the 2nd Secretary of the Embassy. We bid her and Niall a fond farewell. Her new posting is in Limerick. We also met the incoming 2nd Secretary. at this event, Laura Finlay.

I attended the Irish ambassador's residence reception for the 2017 Eastern Regional GAA Championship participants, where I met the incoming ICUF Scholar, Sheila Concannon (we had said farewell to the previous scholar Kate Jordan earlier in the summer at a reception held by Margaret Moriarty).

Sadly, Branch member, Laurie Kelly, wife of Pat Kelly, died suddenly while visiting Ireland with Pat on Aug 30 at age 75. Patricia Avendano and I attended the funeral reception, and left a card on behalf of the branch. The branch made a donation to the St. Patrick’s Home of Ottawa Foundation.

Posted by Ottawa Comhaltas at 20:03 No comments: