Normally, the Echoes of Erin Concert only comes to Canada every other year, and their next tour will be in 2014.

For those of you that were otherwise engaged and could not attend the past October 18, 2012 Echoes of Erin's Ottawa performance, you missed an extremely good concert. It was a sell out and those of us that had also attended the previous 2010 Echoes' concert, agreed that the 2012's group of performers were the best so far. The most talented group of musicians and dancers, the majority barely in their twenties with only one exception, kept the audience smiling, toes tapping, and hands clapping throughout the show. A standing ovation led to the encore. While the performers are young in age they played with a level of knowledge, sensitivity and skill usually afforded to much more experienced performers. Check the Ireland Comhaltas' page to see the full list of performers: http://comhaltas.ie/blog/post/2012_concert_tour_of_north_america


Here are some clips that showcase the talent of the musicians:

After the concert, the performers mingled with those in the audience that remained and played their instruments with those concert-goers glad enough to bring their own. Tunes were exchanged and some trading of dance steps happened. Free tea, cheese, crackers and fruit were on hand up to 12:30 in the morning when the festivities finally came to an end.

Here are some of the thank you notes sent by the performers:

Hope you are all recovered and well after all your hard work with organising the Tour etc. I know you put immense work into arranging the Concert Tour to Ottawa I just want to say a sincere thank you to you especially and all the committee etc., who worked along with you for all your wonderful work in making arrangements for the Tour. You really put on a fantastic reception for us and you had all preparations well in place so that everything went so smoothly on the night. We have been left with such fantastic, unforgettable memories of a beautiful place around Ottawa.


Our Tour was a fantastic success ...Canada has set the bar very high now...which is tribute to all of you and the local committee for all your hard work. The group still talk about the audience response to them on the night of the concert and regard it as one of the best.

Can you say a big thank you to all the host families, and all the lovely people we met, on behalf of the entire group, their hospitality and care for all was greatly appreciated by all and still remembered fondly.

This is just a few lines to express my gratitude for the wonderful welcome we received in Ottawa on our recent Echoes of Erin Tour of Canada. I have to congratulate you on a well organised concert and a lovely warm audience!! I was amazed and delighted at the number of people who were able to speak Irish fluently to me - I do believe that I never met as many Irish speakers at one concert in all our travels!!! I particularly liked your welcome notice at the door and believe that many branches around Ireland could take a leaf from your book!! Karen Tracey and I stayed with M. Maher and I can only say that I have never met such an inspirational person! She was kindness itself and looked after us like we were her own children - we really felt at home!

I think I'm finally recovered from the Comhaltas tour now and back to the hard work in University.

I wanted to send you a quick e-mail to thank you for all your hospitality while I stayed with you in Ottawa. It was a wonderful experienced and very interesting talking to you about your own experiences of traditional music and the many musicians you have entertained in your home.

Thank you as well for the lovely CD's you gave me, they have found a nice spot in my iTunes and are played regularly on my iPod.

Best of luck for the future and I hope I'll be able to meet you again someday.

We are certainly eager to see the new crop of Echoes of Erin performers, when they come back to Canada in 2014!

Posted by Ottawa Comhaltas at 15:16 No comments:


Ottawa University has the distinction of being only one of two official testing centers in Canada for the Irish language proficiency test that is recognized internationally. The test is called TEG (Teastas Eorpach na Gaeilge http://www.teg.ie).

Last year only the A1 level was offered at our testing center in Ottawa. This year both the A1 and A2 levels are offered as long as we get 12 people at each level. The test dates are in May, so there is still time to prepare. They will be similar to the New York times.

For those of you who have learned Irish in Ireland, or others of you have been studying the language regularly here in Canada, the test is a great way to measure your ability in all four skills. The website (http://www.teg.ie) has practice tests for each skill and for all levels

You must register on-line to do the test at: http://www.teg.ie

Preparation Course
Community Irish language programs invariably emphasize conversational skills. The TEG also includes reading and writing skills, and hence a student may need to fill in gaps before advancing to the next TEG level. In order to assist students in succeeding at the A1 level, a TEG preparation course is being held at the University of Ottawa 17 – 19 May 2013. This is the weekend immediately prior to the actual A1 examination.
The preparation course will include:
Program Cost: $100 (does not include meals or accommodation)
Preregistration Required
Registration Deadline: 1 May 2013
Local Accommodation may be coordinated through:
Síle Scott at (613) 562-5800 ext 3475

Posted by Ottawa Comhaltas at 21:17 No comments:

2013 is the Year of Irish, and as a celebration of Seachtain na Gaeilge - Irish Week, we will be hosting a reception here in the university. We will come together on March 22nd, between 5-7, at Room 509 in the Arts Building, to speak and celebrate our language. It's very important that we show how much we treasure Irish. I hope to have you join us for the get-together! Food and drink will be served. Do join!


Learn Irish on-line || Ranganna Beo ar Líne
On St. Patrick’s Day, people all over the world will be celebrating the Irish language and Irish culture. Now, with Gaelchultúr’s live online Irish classes, you can learn Irish anywhere in the world! The next series will begin between the 19th and the 21st of March and learners will participate in one class a week over 10 weeks. Here is a list of the classes being offered:

If the above days or times don’t suit you, don’t worry: we have a wide range of other options to help you learn or improve your Irish.


Posted by Ottawa Comhaltas at 21:04 No comments: 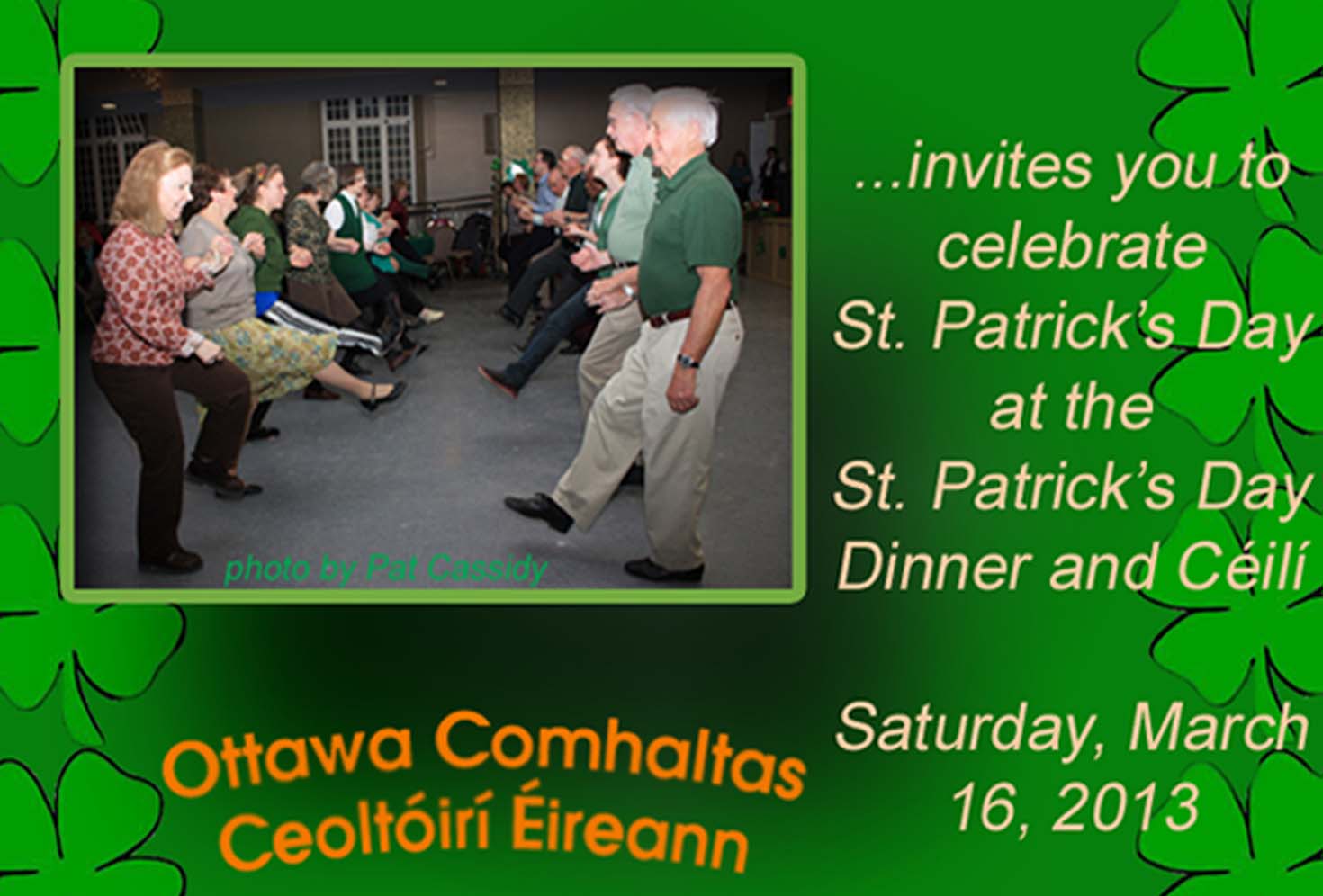 Last year's dinner and dance were a sellout and a HUGE success. In fact, last year, we had to turn people away at the door. It will sell out this year, so you should get your tickets as soon as possible.

We will have the same excellent caterer as last year - Franz Gierer - and the menu promises to please, a 3-course Roast Beef Dinner with a vegetarian option is available.

After a first-class, three course complete dinner, with wine available for purchase, there will be an Irish dance (Céilí), with the dances called. No experience or partner is required, and it is loads of fun and helps work the dinner off.

The excellent Comhaltas Céilí Band will provide the music and Sheila Scott will call the dances.

There is a cash bar, a raffle, a 50-50 draw, and a multitude of crafts and items for sale.

At around 11 PM, there will be tea and snacks.

A splendid time is guaranteed for all.


All tickets purchased after January 1st 2013 will be $35. By ordering online now, you get your tickets guaranteed.

For paper tickets and information contact any member of the Comhaltas Executive at:
http://www.ottawacomhaltas.com/contact.php

Learn Irish!
When: Saturday 9 March 2013 from 8:00 till 4:00pm at the Blessed Sacrament   Church Hall.
Where: The Blessed Sacrament Church is located at 194 Fourth Avenue (at the corner with Percy Street) in the Glebe, Ottawa.
Cost: $25. Which includes lunch and snacks.


Caint agus Comhra, under the auspices of Comhaltas Ceoltóirí Éireann - Ottawa branch, invites you to a day of learning the Irish Language, just in time for St. Patrick's day.

Learn a few words, brush up existing ones, and have a little fun doing so.

Our teachers are friendly and came from as far afield as Ireland, Montreal ,and Ottawa. University teachers all!

Bring your willingness to learn and your sense of fun.

Everyone welcome
See you there!
Posted by Ottawa Comhaltas at 22:02 No comments:

CCÉ Ottawa is happy to announce that Nora Villarreal, branch member and daughter of Chairperson  Sheila Scott, is representing CCÉ as a contestant for the Ottawa Rose of Tralee.  Nora is competing against 8 other young women!

The Selection for the 2013 Ottawa Rose of Tralee will be on Sunday afternoon, March 17th ,at the Ambassador’s Residence.

Tickets are $25. The money raised through entrance fees to all the fundraising events and the Selection is used to offset the cost of sending the winning
Ottawa Rose to Ireland.

To attend to this event at the Irish Ambassador's residence, order them online at http://roseoftraleeottawaselection2013-es2005.eventbrite.com/?rank=1

To see the mini-bios of all the applicants, check the Rose of Tralee site:
http://www.roseoftralee.ca/2013-rose-applicants.php

Best of Luck Nora!!
Posted by Ottawa Comhaltas at 22:06 2 comments: