It is with great sadness that we reported that Don died on 25 December. See his full obituary here.

Don, a native of Dublin, grew up with traditional Irish music, he was a well-known musician renown for his slow airs, hornpipes, and waltzes played on his trusty harmonicas (an Hohner Chrometta and Chinese Lark chromatics, but more as solo-tuned diatonics than as true chromatics), but he always kept the ornamentation to a minimum.

He arrived in Canada in 1954, and along with other Irish-born musicians founded CCÉ Ottawa Branch in 1975. In 2002 he was introduced to the CCÉ Canada East Region Music Hall of Fame.

The best way to remember his music legacy is by the memories people have of Don’s life and their experiences of meeting him:

Sheila Scott, former CCÉ Ottawa Chairperson || Cathaoirleach:
It is with great sadness that CCÉ Ottawa announced the death of one of the leading Ottawa branch's founding members. Don Kavanagh passed away on 25 December 2016. A gifted musician and story-teller, he gave so much of his time and energy to the promotion and continuation of Irish traditional music in the Greater Ottawa and Outaouais regions.

The hornpipes he played were legendary, but with any reel, jig and slides, he had your toes tapping as well. They will be having some great ceilis in heaven these days. You were the best Don! Glad you are reunited with your darling Celie!

James Stephen (local musician):
I remember first meeting Don in the mid 1980's when I was playing an outdoor gig in Aylmer with Nathan Curry and John Wood. While I had been playing violin for a long time at that point, I was relatively new to playing Irish traditional music. Nathan got Don up to play a couple of tunes on stage with us, and I remember thinking that this was something I'd never heard before, harmonica playing this kind of music. What I remember the most was the depth of feeling in his playing and the nimbleness of his ornamentation and the overall energy that came out of this spry little man.

I guess I was a bit intimidated, realizing that I knew next to nothing compared to this guy. But when I talked with him after the show he completely put me at my ease with his hallmark social ease and welcoming, almost conspiratorial manner. Here was a man that loved music and being with fellow musicians and he was entirely supportive of my efforts, as inadequate as I felt they were. I asked him about the pieces he had played. Not only was he more than willing to tell me about them (in great detail and with great humour), but he generously offered to record them for me; which he did on a cassette player and I went to his house and collected the cassette days later. From then on, at varying intervals he would call me up and discuss not only Irish music and new developments therein, but also history and politics and people that he had known, who were legion in number. It seemed as if he remembered everyone he had ever met and all the salient details of their lives and their challenges, victories and failures. He was a very empathetic person and I often told him he should write down he impressions of the world. I hope he did. I have still some of the cassettes Don gave me with a full set of liner notes and credits written by him in tiny handwriting that I would struggle to make out without a magnifying glass. He made sure that I also was informed about the social milieu from which these Irish tunes arose, and gave me books to read on Irish history which he felt was important to understand to give the music a context to be placed in.

Recent Irish history was nothing academic for Don, as the Irish Civil War was not long over at the time of his birth, and which had ripped his family apart; uncles and cousins finding themselves on opposite sides of the conflict. His identity was formed by his upbringing in Dublin, but his family mostly all moved away from there to far flung parts of the world, some spending most of their lives on the African continent, helping the least fortunate people there, work that Don wholeheartedly supported.

Dublin in the Great Depression and World War II must have been a hard place for most people, with much poverty and great suffering, and Don was very attuned to this all his life, and was angered by social injustice wherever he detected it. Don had many stories about different jobs he had had, but my favourite ones were from his "Sweety Man" era. He delivered candy to stores across the length and breadth of Ireland as young man, maybe as a 19 or 20 year-old, and discovered the beauty of his country outside of Dublin. I often heard Don talking to visiting Irish musicians about where they were from and more often than not, he could describe the town they came from and local landmarks. What a memory!

Frank Cassidy, Nathan Curry and myself decided that Don's music should be recorded back in the 1990's. Don had already had triple bypass surgery and survived cancer, and he had issues with angina that he was worried would end his ability to play and possibly to live. Happily for everyone, Don far outlived his own predicted life expectancy, but at the time we didn't want to take any chances. So, we gathered a team of local friends and musicians and proceeded to record Don over a year's time, and were able to capture some sense of his musical identity, which was so unique. Harmonica players in Irish traditional music are as rare as a hen's teeth as they say. It gave us all a lot of satisfaction to be able to give back to Don some of what he had given to us, and I know Don was very pleased and proud of is achievement, and I think the CD allowed him to have a wider recognition outside of the Ottawa/Gatineau area. We all were happy and proud to see Don welcomed by the Goodrich Celtic Festival and honoured with their Tradition Bearer Award in 2004. This was a great opportunity for Don to meet players from Ireland such as Peter Horan, and from Newfoundland such as Frank Maher, Jean Hewson and Christina Smith, who all were to become great friends of Don's and warmed to him immediately, which gave him a great deal of pleasure in their friendship. It was to all a mutual love in that was beautiful to see.

Driving the candy truck was a perfect metaphor for this man who everyone was always happy to see and who brought a lot of sweetness into this world wherever he went. I will truly miss him but am forever inspired by his example.

Frank Cassidy (local musician):
In the early 1950s , Don Kavanagh decided to emigrate from his native Dublin to Toronto, Canada. Upon his ship’s arrival in Halifax harbour the party was going strong so Don decided to travel on to the next port of call which was New York. He then travelled back to Canada and his original destination of Toronto. This attitude epitomized Don’s approach to life, life is an adventure, enjoy the party as long as you can.

Don learned his first Irish traditional tunes on the harmonica from his father Michael who was a fiddle player. His early musical influences, in the late 40s and early 50s came from listening to traditional music on Radio Eireann. One of his favorites was the Austin Stack Ceili Band from Dublin. He was also a big fan of Jimmy Shand’s traditional Scottish dance music.

I first met Don in 1989 in Ottawa at an open air concert outside the National Art Gallery. I was immediately at ease with his conversation and his company, he was like a long lost brother. We discussed the status of Irish traditional music in the city, which at that time included a Comhaltas branch, very well attended weekly sessions and a number of groups playing celtic music, many of which had been either founded or influenced by Don.

For Eileen and I, visiting Don and Cecilia in Aylmer, Quebec was like a mini trip to Ireland. Celie would have prepared her famous Irish soda bread and our chat would include wide ranging discussions of current events, politics, music and many of Don’s stories about his life’s adventures. Don was a great student of Irish history, he enjoyed Irish poetry and himself and Eileen would swap lines from Yeats. The week before he died she read him one of his favorites, Lake Isle of Innisfree.

Don had a great regard for his fellow man especially those less fortunate than himself. He raised money for his church, St. Vincent De Paul and many other worthy causes. Each year Don devoted his considerable energy to raising funds for the Kisumba Foundation in Uganda where his brother Brian lived and worked for over fifty years. I had the privilege of working with Don on two fund raising events for the Steven Lewis Foundation. He was tireless in his support of this type of endeavour.

In 1998 Don recorded Don Kavanagh a Dubliner & his Harmonica. The CD beautifully showcases Don’s mastery of the harmonica. Don’s great love of Irish traditional music found expression in the way he played his instrument. The slow tunes were played with great reverence and the fast ones with twinkling eyes and a joy that inspired others to join in the celebration.

We were the very best of friends until Christmas Day 2016 when he slipped away forever into the slow air to join his Irish sweetheart, Cecilia.

“Fairies, come take me out of this dull world, for I would ride with you upon the wind,
Run on the top of the dishevelled tide, and dance upon the mountain like a flame.”
W.B. Yeats, The Land of Heart’s Desire. 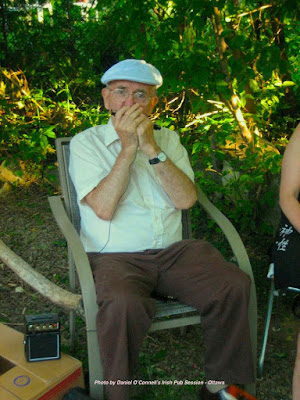 God speed Don! You will be missed by all who ever met you.

Posted by Ottawa Comhaltas at 20:35 No comments: