This is a recount by CCE Ottawa branch PRO, who attended to a Celtic Studies conference in Toronto this past week (week of the 19-23 January, 2015).


Last January, the University of Ottawa Celtic Club finally realised a vision of orchestrating a lecture series for undergraduate students from all across Ontario (we really did extend invitations to many more institutions offering Celtic Studies in North America). The extraordinary Toronto delegation graciously offered to host the 2015 edition, and did they ever do an amazing job!

First of all, more than 50 participants from all over North America took part from 18-20 January. There was an abundance of information exchanged in the presentations given by students. CCÉ Ottawa's Youth Officer Nick Bridges and PRO both gave presentations on various topics. We were glad to reconnect with former Auditor Émilie Lavallée-Funston and former Youth Officer Geneviève Robinson at the conference, where both of these participated by presenting posters (more below).

Aisling Ní Shirín, Tomás O’Murchu's Toronto counterpart, took part in a panel of professors who answered all the questions participants could possibly throw at them. The ensuing céilí on Saturday saw students demonstrate their skills in traditional and creative dance, song, and music.

Comhaltas was proudly represented by Geneviève, now the provincial Youth Officer, by her poster (see photo above). She referred several interested attendees to their local branch of CCÉ and stressed the global nature and growth of Comhaltas. A strong way to start off 2015 indeed, and something to look forward to for 2016.

Posted by Ottawa Comhaltas at 21:36 No comments:

Happy New Year everyone!! I wish you all a bright, happy and healthy 2015.

Language and dance classes are underway. Attendance to the Irish classes was middling on the Monday evening when we resumed classes, but there are two new students in the beginner class. Joan, Barry, and Tomas are back teaching their respective classes. Unfortunately, Oscar Mou cannot teach the beginner classes this semester as he has a course conflict at OttawaU. I want to take this opportunity to officially thank Oscar for teaching the Beginner group all last fall and doing such a great job. The students have said to me that they really enjoyed his classes.

We have had a special request by one of the regular ceil attendees to assist him in surprising his girlfriend with a proposal of marriage at our January ceili. I have indicated that we would be delighted to help out. I suggested that we adapt the bonfire dance so that as many people are on the dance floor and in a circle. I think this is an exciting event to have take place at our ceili. (update: the proposal was accepted!!) 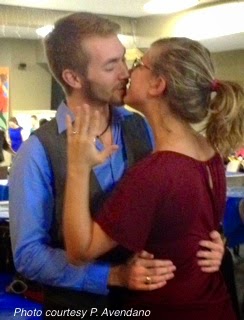 I have contacted the ‘activities coordinator’ for the English Intensive Program at OttawaU and have proposed our ceilis to them. I have also suggested our Monday night dance classes as well. We are still working on the details for the Monday night classes.

Posted by Ottawa Comhaltas at 22:48 No comments:

Celtic Languages: From the Viking Age to Modern Times -- Call for Papers and Conference

Celtic Languages: From the Viking Age to Modern Times

Since 1995 the North American Association for Celtic Language Teachers (NAACLT) has convened an Annual Conference where presentations on various topics relating to teaching and research in Celtic languages are made. The conferences have been very successful in enabling those active in the teaching of Scottish Gaelic, Irish, Manx, Welsh, Breton and Cornish to convene, share ideas, concerns, and maintain further contact.

The conferences are held in different places every year. In 2015 is Portland's turn. In 2013 we were quite lucky to have the conference here in town, at Ottawa University.

The theme this year is “Celtic Languages: From the Viking Age to Modern Times.”

Also there is a call for papers: http://www.naaclt.org/resources/Call%20For%20Papers.pdf

NAACLT is offering a $100 scholarship for financial assistance to partially offset the cost of attending the conference. If you are interested in presenting a paper and would benefit from this modest scholarship, please indicate on your submission of the paper that you would like to be considered for the scholarship.

NAACLT is a non-profit professional organization whose goal is to bring together Celtic language teachers and researchers in Canada and the United States and to foster contacts with others through the world who are interested in promoting the teaching and learning of Celtic languages in North America.

Posted by Ottawa Comhaltas at 19:27 No comments:

Employing a wide range of critical perspectives and new comparative contexts, Flann O’Brien: Contesting Legacies breaks new ground in O’Brien scholarship by testing a number of popular commonplaces about this Irish (post-) Modernist author. Challenging the narrative that Flann O’Brien wrote two good novels and then retired to the inferior medium of journalism (as Myles na gCopaleen), the collection engages with overlooked shorter, theatrical, and non-fiction works and columns (‘John Duffy’s Brother’, ‘The Martyr’s Crown’, ‘Two in One’) alongside At Swim-Two-Birds, The Third Policeman, and An Béal Bocht. The depth and consistency of O’Nolan’s comic inspiration that emerges from this scholarly engagement with his broader body of work underlines both the imperative and opportunity of reassessing O’Brien’s literary legacy.


Challenging the critical standard of O’Brien as a provincial writer, these essays reveal his writing as a space that uniquely complicates the old lines between stay-at-home conservatism and international experimentalism. Renegotiating O’Brien’s place in the European Avant-Garde alongside tensions closer to home – Republicanism, the Gaelic tradition, the Dublin literary scene – the collection reveals as outdated prejudice the dismissal of his talent as a matter of localised interest.


Finally, the contributors excavate O’Nolan’s oeuvre as fertile territory for a broad range of critical perspectives by confronting some of the more complex ideological positions tested in his writing. Employing perspectives from genetic criticism and cultural materialism to post-modernism and deconstruction, the essays gathered in this volume address with new critical rigour the author’s gender politics, his language politics, his parodies of nationalism, his ideology of science, and his treatment of the theme of justice.

Ruben Borg and Paul Fagan are to co-founders of the International Flann O'Brien Society. Werner Huber was the host organiser of the 2011 Flann O'Brien Centenary Conference at the Vienna Centre for Irish Studies; the largest conference ever held on the author.
=========

Posted by Ottawa Comhaltas at 21:01 No comments: