The Irish Diaspora in Canada: A History

August 17 to 27, 2017, The International Pavilion, 7 Clarence Street, Ottawa
Release from the Irish Embassy: 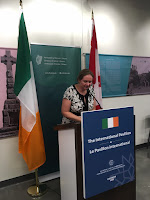 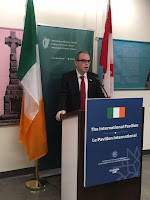 In this landmark year for Canada, the Embassy of Ireland is proud to present an exhibition celebrating the strong and deep bonds of friendship that Ireland and Canada have long enjoyed, as part of the National Capital Commission’s series of Confederation Pavilions.
We are delighted to commemorate the important, positive contribution that the Irish in Canada have made to the fabric of Canadian life as we know it today, through the stories of Irish personalities from the time of early European settlement onward. Visitors will explore the history and vibrancy of the Irish community in Canada from the Atlantic to the Pacific, and from the southern border to the Arctic.

These stories tell about Irish people who provided labour for the physical infrastructure of Canada’s canals, railways and roads, and who were also central to the creation and development of Canada’s political and civic institutions, through their involvement in law, politics, journalism, literature, religion, trade, the military and exploration.

“We welcome this opportunity to partner with the National Capital Commission, as we reflect in this commemorative year on the story of the warm and historic friendship between Ireland and Canada. Irish people have come to Canada since the early days of European settlement, and continue to be welcomed today as skilled workers and students, on business, or as visitors. This exhibition illustrates the Irish contribution to Canada through a selection of their stories.”
—His Excellency Jim Kelly, Ambassador of Ireland to Canada 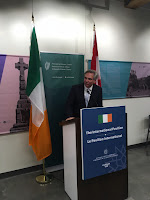 To celebrate 150 years of Confederation, the National Capital Commission identified some of the Capital’s most distinctive, but underused buildings, and set out to find inspired partners to breathe life back into them. The International Pavilion at 7 Clarence Street is a contemporary building that is part of a much larger restoration project in and around the Tin House Court in the ByWard Market. Today, it hosts diplomatic missions that exhibit and promote the best of their culture, commerce, ideas, values and traditions. 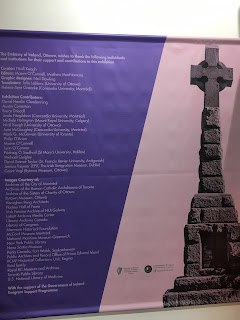 Posted by Ottawa Comhaltas at 23:08 No comments: