Those of you who knew Pat Scott were surely saddened to learn of his death, at 85, last Thursday after illness which took hold last year. He is now reunited with the love of his life, Deirdre Scott (née Mulrennan). He was born in county Kerry, Ireland on the 27 of January 1933 and died in Ottawa at the Elizabeth Bruyère Hospital on the 21 of February 2018. He will be missed by extended family members in Ireland, England, South Africa, and the United-States.

Pat was an influential founder and a fixture of the Irish community in Ottawa; he was instrumental in the creation of the Irish Society of Ottawa, Irish theatre and the Chair of Celtic Studies at the University of Ottawa.

He enjoyed attending the weekly Irish language classes and coming to the ceilis; and just last year we would help him up the stairs to the film festival. He liked to get out into the Irish community until at last he couldn't. He was a great reciter of stories and poems participating many years at the Oireachtas Gaeilge Cheanada in Tamworth, Ontario, winning awards for recitation several times. He also contributed to the Ottawa Irish Arts blog, here you can read his post.
Well, we will miss him, as we already had when his presence became much less.

Pat was the father of the past Chair of Ottawa Irish Arts (Comhaltas Ceoltóirí Éireann Ottawa Branch) Sile Scott.

A celebration of his life will follow and be held at the Heart and Crown, 353 Preston St, following the service, from 12 to 3 p.m.

In memory of both Pat and Deirdre, donations can be made to the Dementia Society of Ottawa and Renfrew County.

His obituary can be read here:
https://www.arbormemorial.ca/kelly/Obituaries/patrick-joseph-scott/16084


The Executive and all members of Ottawa Irish Arts extend their deepest sympathies to the Scott family and closest friends.

Posted by Ottawa Comhaltas at 20:28 No comments:

Ottawa Irish Arts is very proud to announce its sponsorship and wholehearted support of the 4th Annual Irish Film Festival Ottawa for 2018 as a Silver Screen Partner. The Festival takes place from Friday 23 March through to Sunday 25 March at the Arts Court, Daly Avenue, Ottawa. The Opening Gala takes place on the Friday evening. 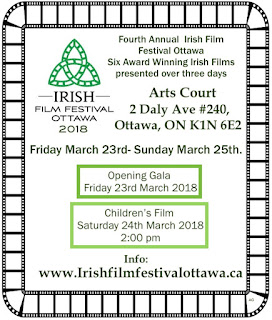 IFFO celebrates Irish culture, language, humor and history through the modern medium of film, promoting Irish cinema and film-makers to audiences from across Canada.

Please plan on attending this fine festival, whether you have Irish roots, or are simply Irish-curious!

7:00 - 7:30PM      Workshop
Join us in the first half hour of the evening for a short
tutorial on steps, holds, and terminology that will have
you dancing your way through the evening with
confidence. Gay Gordon (March) to finish.

Posted by Ottawa Comhaltas at 16:50 No comments: