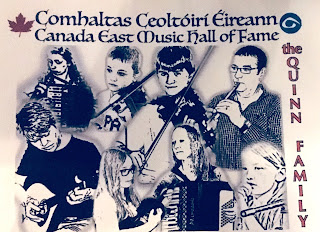 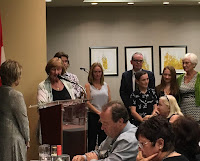 The award was presented by the outgoing CCE Canada East Region, Ena O'Brian and His Excellency Jim Kelly, Ambassador of Ireland in Canada, in Hamilton on 13 October 2018.

Desmond Quinn, born in Belfast, Ireland. He grew up playing guitar, vocals and whistles. He and his first wife moved to Saskatoon in the mid 1970s and brought up their children (Geraldine, Emily and Matthew) with the same passion for music that he received growing up.  In 1981 with his wife and other Irish expats founded the Comhaltas Ceoltóirí Éireann Saskatoon branch.

By 1989 Desmond and his children moved to Hamilton and founded the first Irish session at the Lionhead Pub, and weekly ran successfully to a packed house for twelve years. Years later he was recipient of the Comhaltas Ceoltóirí Éireann Canada East Regional Service Award for his dedication to the promotion of Irish culture in Hamilton.

Bonnie White, grew up in Newfoundland and Nova Scotia, immersed in both Scottish and Irish music and traditions, competing in highland dancing and playing in ceilidhs. She was one of the founding members of “The Scotia Highland Dancers” troupe that toured in Canada and the British Isles during the 1980s. She plays guitar, mandolin, fiddle, banjo and does vocals.

Along friends, which included Geraldine Quinn, formed a Celtic Band in 2006; her interest in learning the timing of Irish jigs and reels that let to Desmond becoming her mentor and later her husband and joined the weekly sessions at the Lionhead Pub.

Geraldine Quinn-MacWilliams, born in Belfast, Ireland and moved with her parents to Saskatoon. She took Irish step dance with her mother as instructor, performing in festivals and concerts and competed in western Canada where she received awards. By age 11 she picked up the piano accordion and focused on Irish traditional music. When she and her family moved to Hamilton, her brother Matthew took up the fiddle so they both competed in North America in Irish traditional music, winning awards and qualified for the All-Ireland Fleadh.

Emily Quinn, she began playing traditional tin whistle at the age of 10, and then piano. She attended the Ontario Conservatory to improve her piano playing where she performed and competed. By age 14, began playing the piano accordion. Currently studies Social Sciences at the University of Ottawa.

Matthew Quinn, began playing music at age eight with the tin whistle and then by age 10 moved to classical violin. He has won the Greater Hamilton Royal Conservatory Music Festival Grade 8 competition, placed 1stin the 2017 and 2018 Provincial Musical Festival with the Hamilton East Chamber Ensemble. In the summer 2018 he enrolled in the Scoil Éigse at Fleadh Cheoil in Drogheda.

Kira MacWilliams(Geraldine’s daughter), began competing in Irish dancing at the age of seven, achieving Preliminary Championship and winning numerous awards before she decided to focus on music. She played piano since she was seven and then changed to violin at 11; currently working on her Royal Conservatory levels.

Riely MacWilliams(Geraldine’s daughter), she began singing when she was five years-old and won several competitions including the Greater Hamilton Music Festival and the Rotary Burlington Festival. In traditional Irish singing she won 1stplace in the O’Donnell Feis, Roseland Feis and Forest City Feis. Also by age 12 she began to play guitar and now participates in the weekly sessions.

Connor MacWilliams(Geraldine’s son), started playing the violin when he was five  years-old and he is working on his Royal Conservatory levels. He has won awards in the Hamilton Music Festival and Kiwanis Music Festival. He has participated in the Mid-Atlantic Fleadh Cheoild, Tir na Nóg. He also participates in ceili dances.

Posted by Ottawa Comhaltas at 22:43